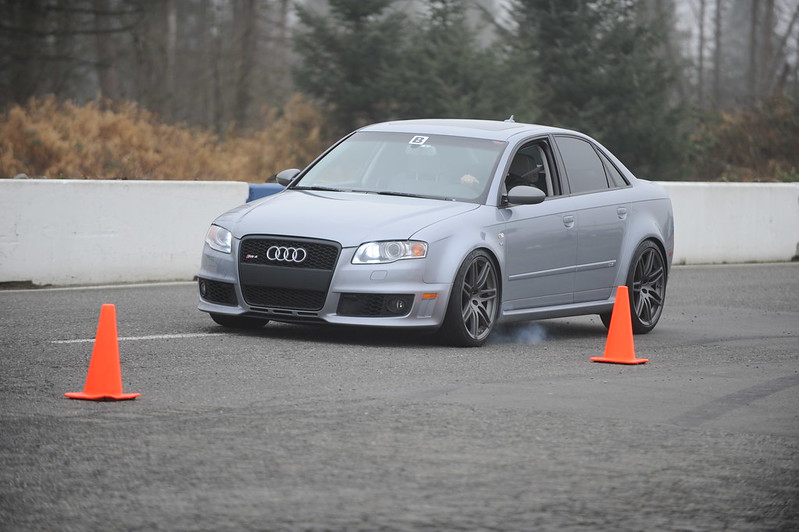 At a Teen Clinic or Driver Skills day, one of the most important things they teach is how powerful and capable the brakes on your car really are. Most folks who haven't had this training have no idea just how hard they can brake, and they've never felt the ABS work. Early ABS had distinct 'pulses' in the pedal feel, and it felt a bit like a malfunction - people would sometimes ease off of the brake thinking something was wrong. ABS does need good firm pedal input to do its job. In late model cars, the ABS pulses are so fast, the pedal feels pretty normal.

I teach in half a dozen different clubs, and there's currently some disagreement on whether to teach trail-braking to novices, or if it's more of an intermediate to advanced technique. Those of us who took Driver's Ed in the last century were all taught to "get your braking done in a straight line" and to never touch the brakes in a corner. That's still a valid approach, but good ABS systems have given us the gift of controllability while braking and cornering. You still have to respect the "friction circle" - you can't combine 100% braking force with 100% cornering force - but you can do roughly 50/50.

One of the great 'visualizations' for trail braking is to imagine that there's a string between the brake pedal and the steering wheel; as the brake pedal rises (releasing brake slowly), the wheel is allowed to turn to initiate the turn in. Braking continues some distance into corner entry, easing the weight transfer and keeping the car stable.

As you're learning trail braking, it's important to choose the corners to try carefully. Broadly speaking, there's two kinds of corners on a road course - 'rotate' turns and 'set' turns. 'Rotate' turns tend to be lower speed, more akin to what you would find on an autocross course. The idea is to get the car rotated as rapidly as possible. 'Set' turns are generally higher speed, where you want the suspension to take a set and the car spends some slightly longer time with a majority of the weight on the outside tires. 'Rotate' turns are ideal candidates for trail braking. 'Set' turns not so much. T1 at Pacific Raceways and T1 at The Ridge Motorsports Park are both examples of 'set' turns where any application of the brake mid-corner will cause the rear end to get light and cause a spin (FF to 1:55 in the video).

On the street, most of us tend to apply the brakes gradually, increasing the pedal force towards the end to bring the car to a complete stop at the desired place, typically a stop line.

At the track, it's useful to "turn this around": Squeeze the brakes pretty hard initially, and then 'trail off' the brake pedal force. The initial hard squeeze transfers the weight forward, increasing the size of the contact patch on the front tires in sort of a virtuous circle. In cars with a lot of aero downforce, this is even more important; get most of your braking done while the car is being pushed down hard.

I recently coached an "early career" HPDE student in a high horsepower rear wheel drive car. This was his fifth track event. At his prior events, he had been taught to brake as late as possible and maximize the use of his cars pretty substantial brakes. This is pretty common advice, and it does keep the car at the maximum speed for as long as possible. The approach has a couple of disadvantages - there's little to no margin for error if something goes wrong, and it takes a fair degree of skill to keep the car 'settled' while doing short duration maximum braking. This was also the student's first time driving on track in the rain, and we did indeed totally over-shoot one of the corners when he could not get the braking done in the required space on pavement. Nothing harmed besides grass and perhaps ego. Since he already knew about trail braking, I taught him to essentially brake earlier with a longer brake release, and that was the essential tool to get him smoother in the rain.

If you've ever been around a race track, you've probably seen brake markers. They typically are used in heavy braking zones, like at the end of the front straight. Sometimes they are simply three cones, followed by two cones, followed by one cone. Some are signs that say "300", "200", "100" (circled in red in photo, left). They're there to convey to the driver how far from the corner they are, with the numbers typically denoting either "yards" or "meters". Coaches are used to being asked what marker to use. Maddeningly the answer is usually, "That depends on a bunch of factors."

Among the many duties of the instructor / coach for a new student is to help him or her stay safe. Most people have very little experience in braking from 120 mph. Braking distance is a function of velocity squared, so judging the distance is tricky until you get a feel for it. The instructor / coach will err on the conservative side for braking until the student demonstrates their ability along with the car's ability.

Brake markers are best used as reference for your own experimentation. Let's say you begin the day braking at the "200" marker, and you find that you're actually braking way too early. On the next lap, maybe you try braking mid-way between the 200 and the 100. Adjust as you gather more "data". Remember that at 120 mph, you'll cover 100 yards in about 1.7 seconds.

When you think you "know" which brake marker to use, be ready to adjust for any number of factors: cold tires, wet pavement, cold brakes or overly hot brakes, etc. And of course in an HPDE, there's no passing in the braking zone. That means you need to keep an eye on the car in front of you and for the most part avoid braking later than they are.

Many advanced drivers don't really fixate on when braking begins, but more on when braking ends. They envision a spot on the track and the speed they want to be at for brake release, and they make that happen. Sort of a zen thing.

I haven't spent any time on this page discussing the actual equipment. One could devote a whole website to braking equipment. A student can attend quite a few HPDEs on their stock brakes with few worries. They should be on the "first half" of brake pad life at the start of an event, and the brake fluid should be less than a year old. At the point that you're replacing brake pads, you might choose a more aggressive pad for enhanced braking. Unless you're going to change pads at the track, you should look to one of the 'compromise' pads like EBC Yellowstuffs. EBC Yellows are suitable for daily driving as well as HPDE use. Be forewarned, a 'performance' brake pad generally creates more brake dust than the stockers.

Many people who get "the bug" to do more HPDE days make the leap to a Big Brake Kit (BBK). If you do go BBK, make sure the pad size you're buying into is commonly available, and be sure to factor in if the BBK causes you to need larger wheels to clear. Honestly I feel some people do the BBK to look cool and don't really need it. On the other hand, it's every instructor's nightmare to be faced with a brand new student who has boosted their horsepower on their otherwise stock car up to the 450 plus range without a thought to how to slow the beast down.

Back to the HPDE Page